We got married in May 2002 in Hyannis, Massachusetts, USA. We rented a house near the beach and that’s where we had the ceremony, the party after the where we spent the days after the wedding with our families. 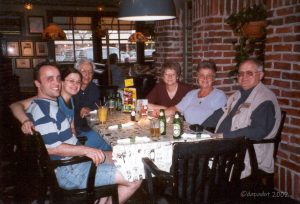 It was not a big affair, we only had a few friends and close family members with us. We were pretty lucky given that the day before (when we originally wanted to get married as it was Saturday) it rained like crazy! Then, come Sunday morning, all rain was gone and we had an amazing day!

We were all preparing the house the day before:

The ceremony was officiated by a justice of peace. He read a beautiful text related to the sea and the sun and love 🙂 No god mention, at all 😉 I quite appreciated the US system where a justice of peace can marry you anywhere, no need to go to a town hall…

And then we were married 🙂

We initially wanted to get married on the beach, but even with the sun it was not warm enough to do that. The house had a really beautiful lighthouse tower on top so it was amazing to be able to get married looking at the sea 🙂

However, after the congratulations and photo session inside, we did go to the beach.

The party then continued in the house…